The volunteers work in the garden on Wednesdays and Saturdays. There are plants for sale and, in season, garden produce. Visitors are most welcome as are new volunteers.

The garden was established in the 18th century to provide the owners and staff of the estate with fruit, vegetables and flowers. The garden had been largely neglected for many years when, in 2011, the RHSI took on the task of regenerating it under a 25 year licence agreement with the Alfred Beit Foundation.

The area to the north of the central path has double herbaceous borders, a fruit plot, a rose plot, herb bed, holding rows, an  ornamental area with curved beds and wildflower circle backed by a sweet pea fence in summer. There are productive perennial and rotational vegetable beds as well as both tender perennials and annual edibles in one of the existing glasshouses. The garden is being managed organically without sprays or pesticides. The use of peat is being phased out and alternative products are being researched.

The area south of the central path has been divided into four separate areas with hedging. We hope to develop these to include a Rose Garden, an Irish Garden Plant Garden and a Shade Garden. The North Kildare Beekeepers have set up three beehives along the south west wall.

This project is being undertaken entirely by volunteers with funding by donations and grants and the sale of plants and produce. We are always in need of more resources, both human and financial. Volunteer gardeners are always welcome. No experience is required  - just enthusiasm and energy.

If you are interested in volunteering in the garden please contact the Volunteer Coordinator Gillian Davidson on volunteering@rhsi.ie or 087 668 9381. 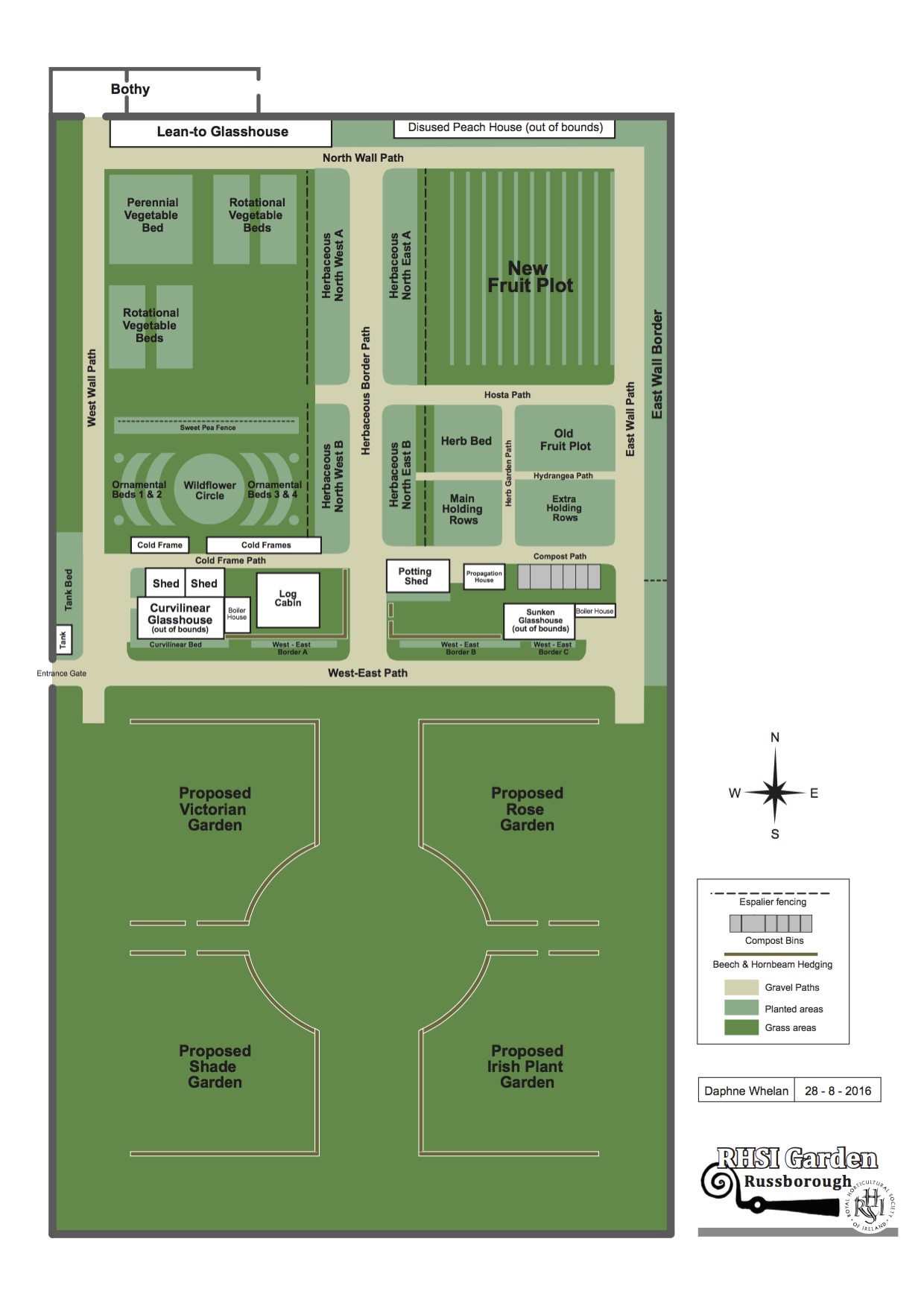 Anne James - A distinguished horticulturalist in charge of RHSI Garden Russborough, she holds a Masters in Horticulture from the RHS, MA in Garden History/Archaeology from Bristol University and was Executive Park Superintendent of Fingal County Council prior to her retirement. Among her achievements is the cataloguing of the entire plant collection of the Talbot Botanic Gardens, Malahide in 1982-83, following which she was curator of the gardens. Anne also managed the restoration of the derelict walled garden at Ardgillan Demesne in 1992.

Daphne Shackleton - A graduate of Trinity College, Dublin where she took an Honours degree in Botany followed by a PhD, Daphne went on to practice as an environmental consultant. She managed the Shackleton garden at Beech Park in Clonsilla, Co Dublin while bringing up her family and now manages her organic farm and gardens at Lakeview, Mullagh, Co Cavan. As a botanical artist she exhibited her work in many group shows in the 1980s. For the past ten years she has combined her expertise in plants, ecology and gardens with her artistic skills in a successful garden consultancy practice in Ireland and abroad.

Diarmuid Gavin - Garden designer, author and TV presenter, Diarmuid won an RHS Chelsea Flower Show Gold Medal in 2011 and a Silver Gilt in 2012, the latter for his innovative 80ft Westland Magical Tower Garden, which won the Most Creative Show Garden prize, the first time it had been awarded in five years. He is well known in both the UK and Ireland as a presenter of BBC’s Home Front in the Garden and RTÉ’s I Want a Garden.

John Anderson -  Renowned as a plantsman, John Anderson is a member of the RHS Woody Plants committee. Since 2016 he has been the Keeper of the Gardens at Windsor Great Park with responsibility for the Savill Garden, the 250 acres Valley Garden and the private garden of Windsor Castle Frogmore. Previously he was Head Gardener at Exbury Gardens, Hampshire, and before that in charge of Mount Usher Garden, Wicklow.

Joy Larkcom - One of Britain’s most respected vegetable experts and garden writers, Joy has contributed to many magazines and newspapers, radio and TV programmes and has lectured all over the world. Her accolades include winning the Garden Writer of the Year award three times, the Lifetime Achievement Award from the Garden Media Guild in 2003, and the prestigious RHS Veitch Memorial Medal for horticulture in 1993.

Matthew Jebb - Director of the National Botanic Gardens Glasnevin since 2010, Matthew took his primary degree and PhD at Oxford University. He is an Irish taxonomist and botanist specialising in the ant plant genera. He was Keeper of the Herbarium and Taxonomist at Glasnevin from 1998, until his appointment as Director. His research interests are varied and include the origin and conservation of Irish flora, the flora of Clare Island and other small island floras.