The two bottles were used for the storage of bunches of grapes.  The jar on the left is French and is known as a ‘Thomery Jar’ and the one of the right is a British bottle of slightly later date.

The process was the same in both cases. A bunch of grapes was cut with a large section of the vine left attached to the bunch – this formed a T shape. Special shelving units were constructed with the shelves set at an angle and with holes drilled in each shelf. The ‘jars’ were placed in the holes and filled with water and then one end of the T was inserted into the jar. By this means bunches of grapes could be kept fresh for long periods.

There were two problems with this method: the first was that special shelving units with angled shelves had to be produced – the second problem caused greater difficulty. The water in the jars had to be topped up and it was very difficult to do this without drips falling onto the bunches leading to mould and rot and the loss of the bunch.

As always the Victorians set out to improve this and the result is the third bottle shown in the photograph.  The is known as a ‘Copped Hall’ bottle and was produced by William Wood and Sons of Wood Green.  This new design solved both of the aforementioned problems. As the bottle had a flat base ordinary shelves could be used – nor more angled shelves and no more hole drilling – and as water could be added via the hole in the ‘top’ of the jar the problem of drips landing on the grapes was eliminated.
Victorian horticultural ingenuity at its best. 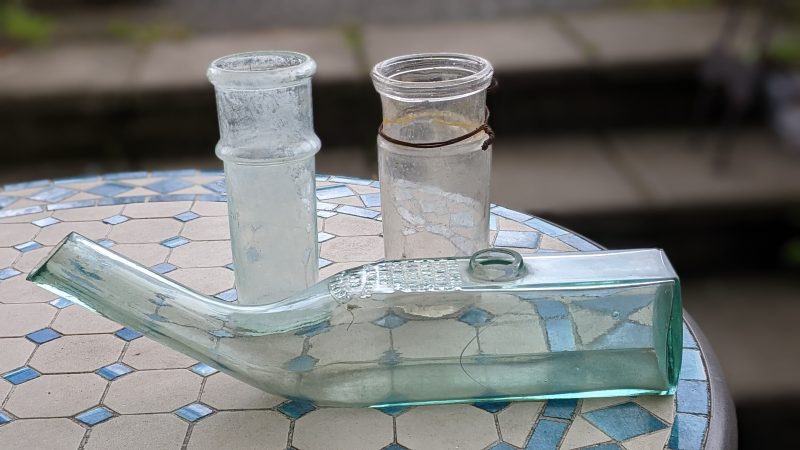