For the love of trees – Mary Keenan

Suggestions from talk “For the love of trees” by Mary Keenan, Gash Gardens, Co. Laois

Acer griseum – paperbark maple
One of the finest small trees for any garden. Slow growing to around 5m . Bark is rich, warm mahogany and peels away in papery tatters that show brilliant orange against the sun, revealing smooth, cinnamon-coloured new bark underneath. Dark green leaves turn vivid, fiery scarlet in autumn. Can be sourced as a single trunk or multi-stemmed specimen. Grown from seed and so quality of peeling bark can vary – make sure that peeling effect is visible before purchasing.
Acer davidii ‘Serpentine’,Acer pensylvanicum – snakebark maples
All snakebark maples have handsomely striped barks – most are green and conspicuously streaked with silver to look just like a snakeskin. Most assume rich autumn leaf colour in attractive shades of orange, yellow and red and make interesting multi-stemmed trees, reaching up to 6m after 20 years
Acer palmatum cultivars – Japanese maples
Various small, slow-growing varieties available. Grow them in a sheltered spot, out of direct sun. May be crown-lifted by removing lower branches to from canopy and create space beneath. One of the most attractive is a purple-leaved form Acer palmatum “Bloodgood”. Also desirable is Acer shirasawanum “Aureum”. It eventually grows to around 4m tall. In spring, the golden-yellow, palm-like leaves open out from pinkish-red sheaths like elegantly pleated fans.
Acer platanoides ‘Globosum’
Contributes striking architectural impact in an area where space is limited. Normally top grafted at around 2m, the branches form a dense, globe-shaped head. Resembles a lollipop on a stick. Excellent yellow and orange autumn colour.
Acer pseudoplatanus ‘Brilliantissimum’
Leaves unfold in spring in the most amazing shade of shrimp pink, gradually toning down to yellowish-green. Look for a top grafted specimen to limit eventual size. Forms a neat and dense, dome-shaped canopy.
Amelanchier alnifolia ‘Obelisk’ – alder-leaved serviceberry

The Potato Graip. An antique which became a garden tool unique – Maurice Parkinson

Many years ago, I had an interest in acquiring antique gardening tools. On that basis I attended a local auction and old potato graip was raised for sale by the auctioneer.  The rest is one of immense surprise and good fortune. It was not purchased for use but rather for display but soon after the day of purchase it became one of the best garden tools we have. During gardening workshops, I often have this graip in use, invariably to the surprise of everyone but it quite amazing the tasks that it can assist with. 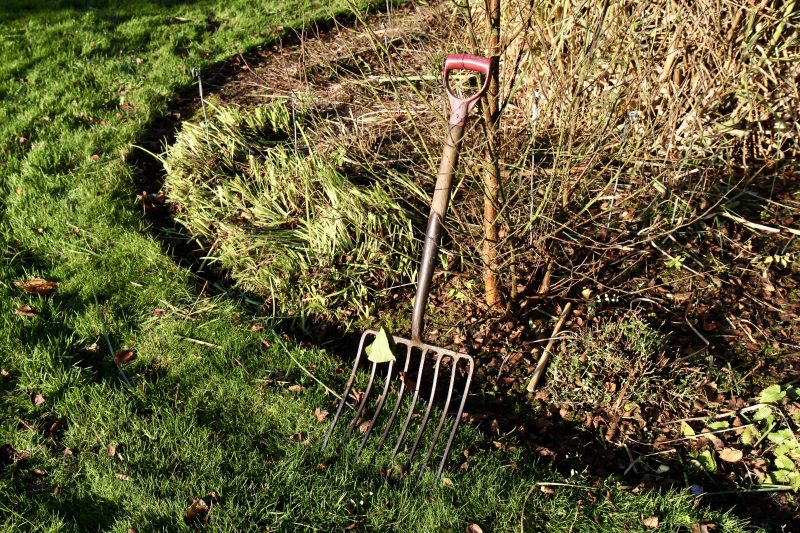 The graip’s greatest use is for the collection of the vegetation from borders which have been cut back in early winter. Because the tines are spaced at approx. 1.5 inches, virtually everything can be raked and lifted yet at the same time leaving many smaller pieces which add to the enrichment of the soil and provide for wildlife.

Unfortunately, the soil at Ballyrobert Gardens is very heavy and liable to smearing and compaction. The graip is the perfect solution because the version I have has spiked tines which insert the soil relatively easily The general shape of the implement enables one to prise the soil upwards allowing the soil to open up enabling water to escape and air exchange to improve. When used on lawns in this manner, I provide a top dressing with a coarse sand which is then worked in.

My graip is also perfectly at home when preparing areas of soil for grass seed sowing for lawns etc enabling the easy removal of larger sized stones. It has been used on occasions for cultivating soil in the veg garden.

Remarkably and for the first time this autumn I actually used it to scoop up potatoes which had been dug up and left on the soil surface for a few weeks to allow the heavy soil to be washed off by the rain.

You may be surprised to know that this list represents only some of the jobs that are assigned to it, but it would be interesting to know if others use the potato graip in the garden.

I have yet to meet anyone who has!

The Irish Society of Botanical Artists is delighted to announce the launch of SCEITSE – IRISH BOTANICAL SKETCHBOOKS on Friday the 20th of November 2020.

This exciting new publication seeks to de-mystify and celebrate the complex journey of botanical artists as they collect information and prepare to illustrate a particular plant. This includes ‘visiting’ plants in their habitat or in gardens, to see them in their natural or intended setting. The sketchbook pages in this collection show the breadth of information a botanical artist may collect, from plant features and measurements, to colour notes and descriptions of the setting.

Irish botanical artists are fortunate to have access to unique and diverse gardens, both public and private, in which to glean information and complete research for their paintings. We have included beautiful pictures and writing from those in which we worked for this project, hoping to celebrate the island’s horticultural treasures and encourage visitors to seek them out.

Since its formation in 2014, the Irish Society of Botanical Artists has burgeoned into a thriving, lively and reciprocal group of botanical artists. The Society has undertaken three ambitious projects, staging successful exhibitions and producing three wonderful books, Aibítir – The Irish Alphabet in Botanical Art (2014), Plandaí Oidhreachta – Heritage Irish Plants (2016) and Éireannach – Celebrating Native Plants of Ireland (2018) For each book, our artists created finely detailed and finished portraits and illustrations of both cultivated and wild Irish plants. An enormous amount of work went into each painting as each artist sought to identify and illustrate the key features of their chosen plant and portray it in a beautiful way. The resultant collection of paintings in the ISBA books are of an extremely high standard and have been lauded in botanical art and botany circles.

SCEITSE – IRISH BOTANICAL SKETCHBOOKS will be available to pre-order from the 1st of November 2020, on our website: www.irishbotanicalartists.ie/shop, at a reduced price of €20.00. Orders will be shipped soon after the launch date of Friday, 20th of November.